Today my hubby and I spent the day browsing the antique stores in Selma, NC and of all things I spotted the image of Alexandra of Denmark.  Yes, she is one of my L&B dolls and currently the reigning queen since she is in near mint, uncut condition.

I've been told she represents Alexandra of Denmark who became
Queen-Consort of England by marriage to King Edward VII.
Alexandra was known for her trademark tall collar of pearls she always wore,
presumed to conceal a scar she had on her neck due to a childhood operation.

So is this doll the King wife or his Mistress????

I could not resist the low price of $3.50 for this old pair of trading cards, especially since it was my husband who paid for them. - (grins and giggles) 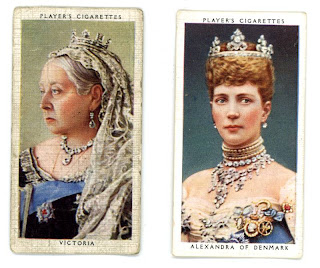 The front of the Queen Victoria and Alexandra of Denmark Cigarette Cards
each measures approx. 2 5/8 x 1 3/8 inches 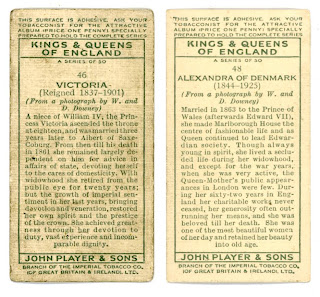 The Backs of the Tobacco Cards with information
about each Queen of England.

I've known for a  long time that Tobacco and later Cigarette cards existed but I never really gave them much thought.  I had seen a few examples of them with images of sports heroes and hunting themes, so they never appealed to me much. After I got home with my new find; I pulled up a little information on them and was pleasantly surprised by the large variety of subject matters that were made over the years.  I don't have any current plans to collect these; however I may add one here and there if I really like the image. 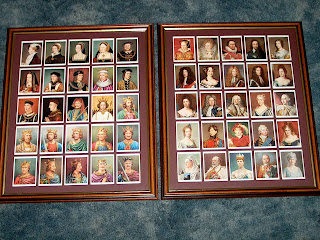 This is what the entire Player's Kings and Queens of England Series looks like. 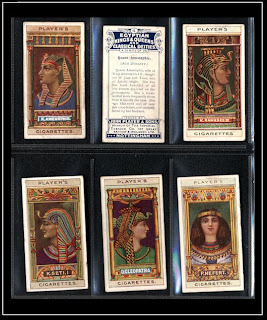 Cards from the Egyptian Kings and Queens Series 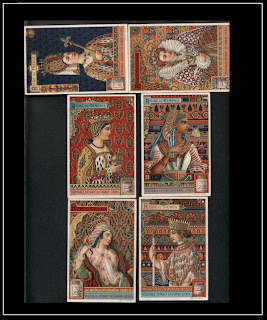 Another set of "Royals" 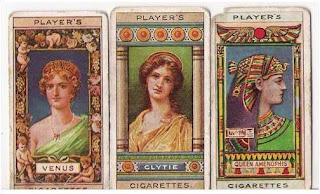 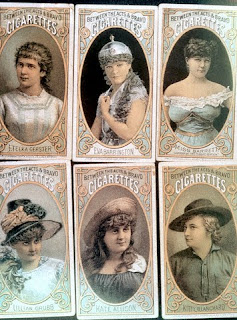 Actress Cards seemed to have been popular. 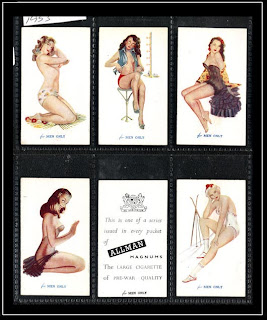 Pin-up's.
This gives a whole new meaning to the old phrase.
"Honey, I need to step out to get a pack of smokes" 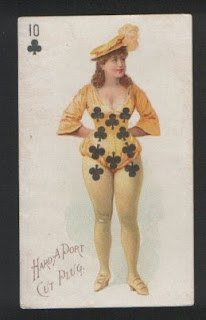 Personally, I liked the older version of the risque cards
like this lady of hearts... but then again I do like my Victoriana.

I can see where these would be fun to collect, since they don't take up a lot of room and for the most part they probably don't cost too much a piece; unless you are searching for one that is very rare and in mint condition.  I remember back in the 1990's hearing my brother and friend discussing the value of a rare Honus Wagner that sold for @ $500,000.00 and from what I saw today it appears one went for over $1 million.
So there is a vast price range of collectability. I bought 2 cards for $3.50 today and from what I saw on eBay you can get some nice cards for pennies to a few dollars a piece if you're not into spending the big bucks on an authentic Honus. 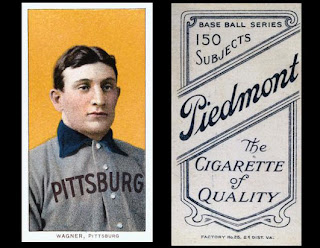 I'd still rather have one of the pretty lady cards over a Honus Wagner.
However if someone gave me one that was the real deal; I'd book the first flight to one
of the famous auction houses and that baby would be sold.

Grins and Giggles till the next adventure,
Evelyn (EKDuncan)