Ackermann's Repository was a popular monthly magazine in England from 1809 - 1829 that listed a wide variety of current subject matters to entertain the masses of Regency England.  There were political commentaries, poetry, short stories, current events, special exhibit information, stock and commerce reports and other interesting tidbits in its pages.  Each issue also contained wonderful color illustrations showing fashions, home decor, public places of interest, architecture and a variety of items that would be of interest to their readers.
I've been spending this summer posting the Fashion plates from Ackermann's here on my blog so I could share all the pretty ladies that have been hiding in the dust of it's pages for 200 years.
You can see the ladies of Ackermann's Series 1  (1809 - 1815) in my July postings
and I continue now with Ackermann's Series 2 (1816 - 1822) here in my August postings.

Today I'm posting the fashions from 1817
Series 2 Vol 3 was Jan - June 1817
Series 2 Vol 4 was July - Dec 1817
Please note that the two fashions for December 1817 are Mourning costumes.
This is because all of England was in mourning due to the death of Princess Charlotte;
who was the only child of the Prince of Whales, later to be King George IV.

I will post her death notice below all the fashions for those you are interested in seeing
how her life, death and funeral were reported in the pages of Ackermann's.


The last two fashion plates for December 1817 are Mourning Fashions due to the death of Princess Charlotte the previous month.  She died on November 6th 1817 at the age 21 - in childbirth, the child was a stillborn male.  Had she outlived her grandfather and father she would have been Queen of Great Britain; however this was not to be.
It appears the death of Princess Charlotte has a similar effect to the Regency people as
Diana's tragic death effect their descendants close to 200 years later.
I found Ackermann's account of  Princess Charlotte's death fascinating in comparison to the historical records I have read.  The historical references show that her husband Prince Leopold of Saxe-Coburg-Saalfeld had been with her through the trying ordeal but after the child proved to be stillborn and he was informed his wife was in stable condition; he took an opiate and collapsed into bed.  When it was later discovered that Charlotte was in distress and dying, he could not be roused due to the drugs in his system, yet Ackermann's reported that he was there holding her hand and telling her that he loved her as she died.  Here is a case of telling the public what they wanted to hear over, reporting the actual facts.  It is still interesting to see how it was portrayed in publications of the day so I hope you enjoy seeing it too. 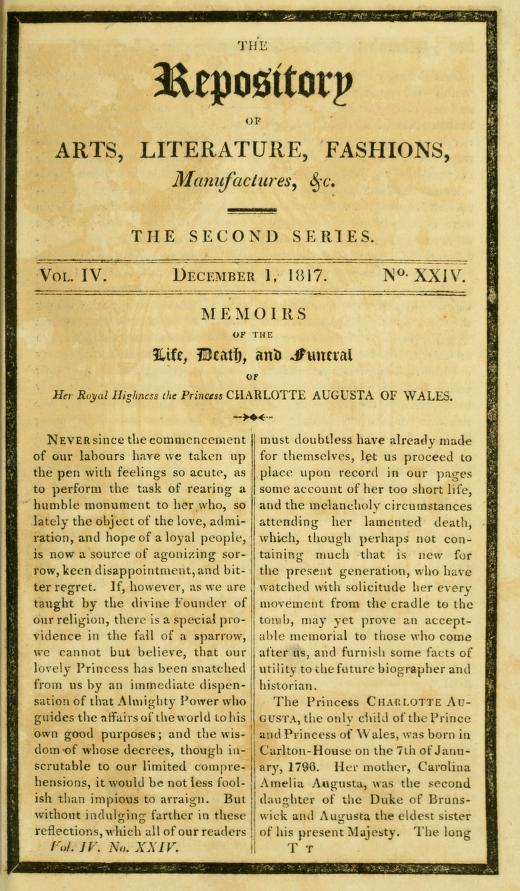 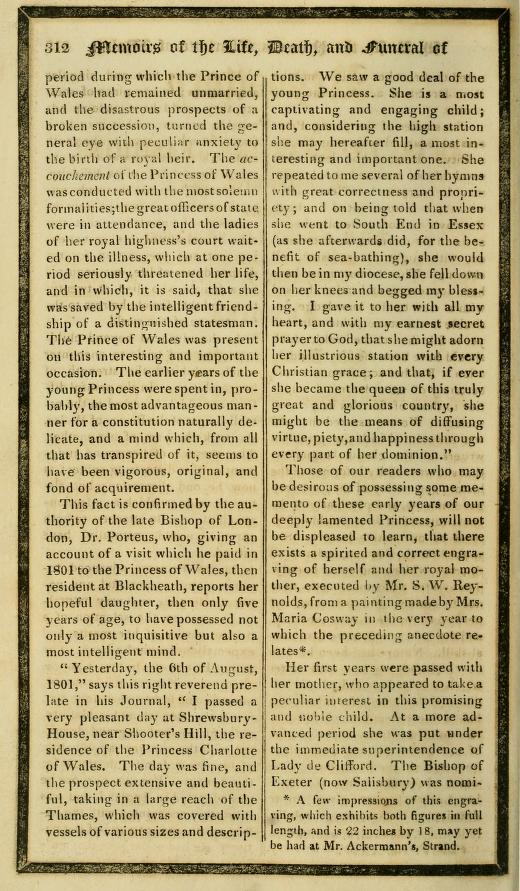 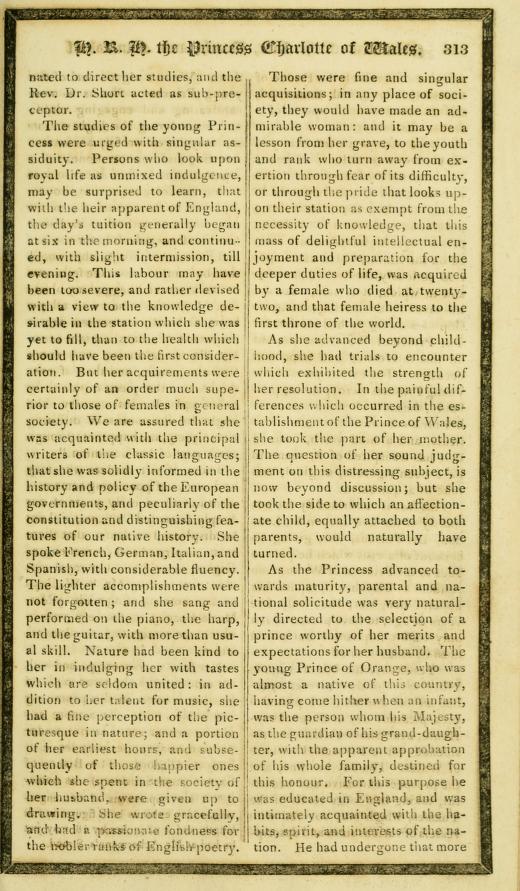 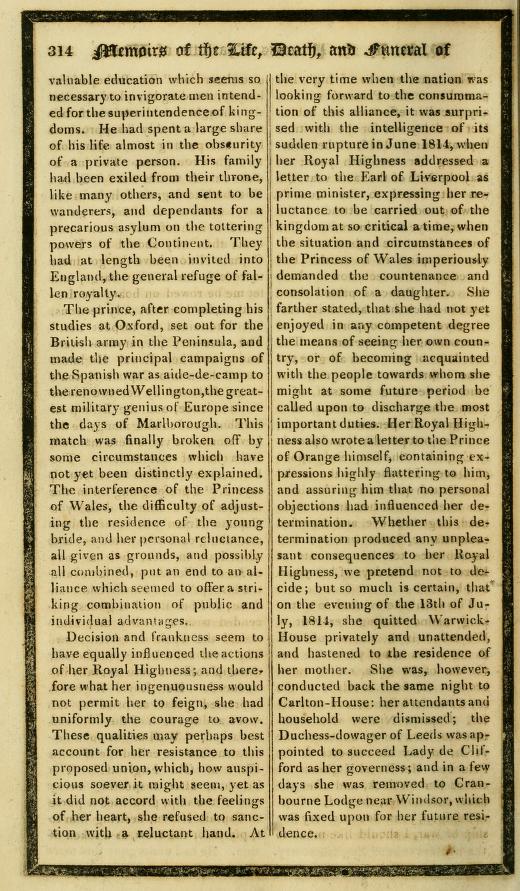 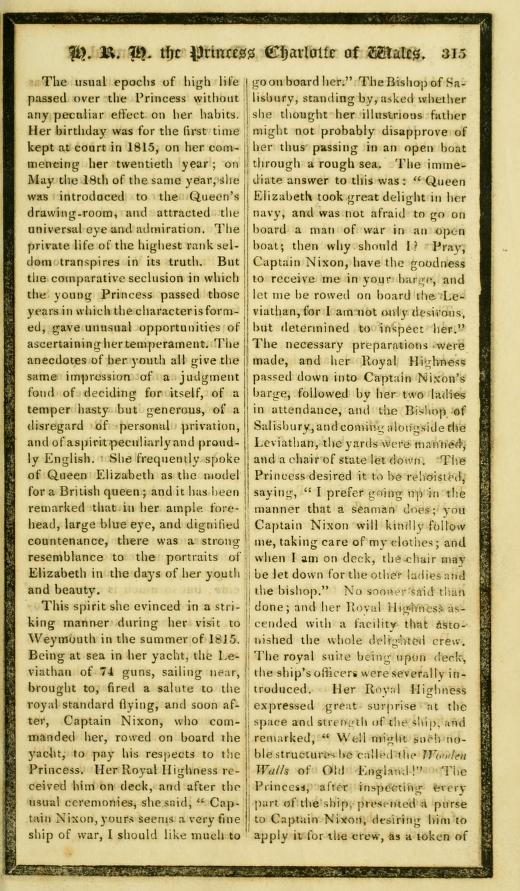 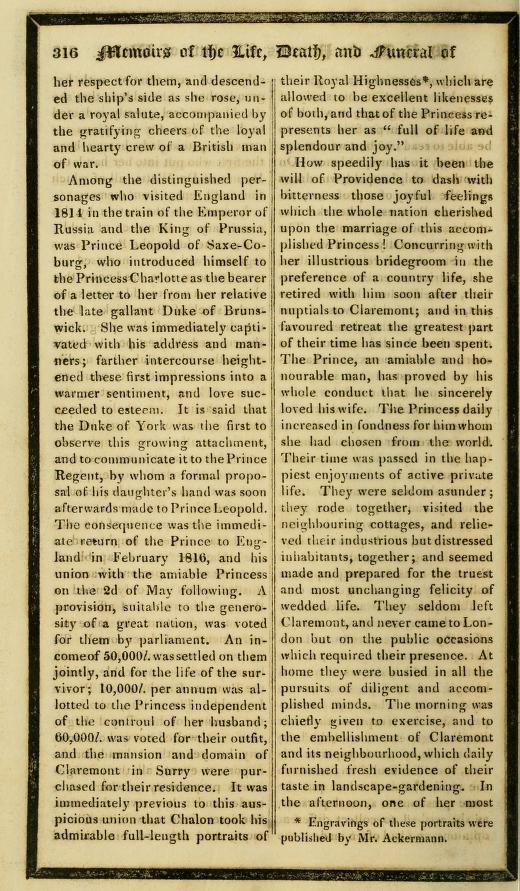 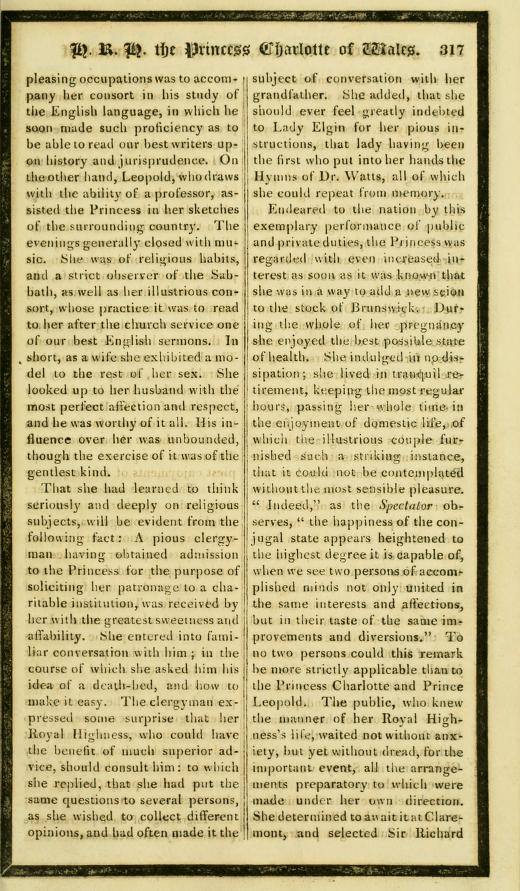 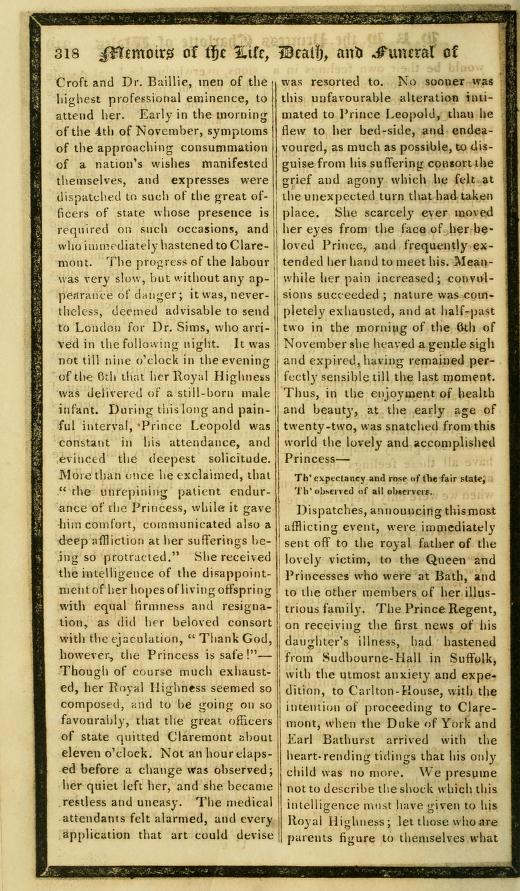 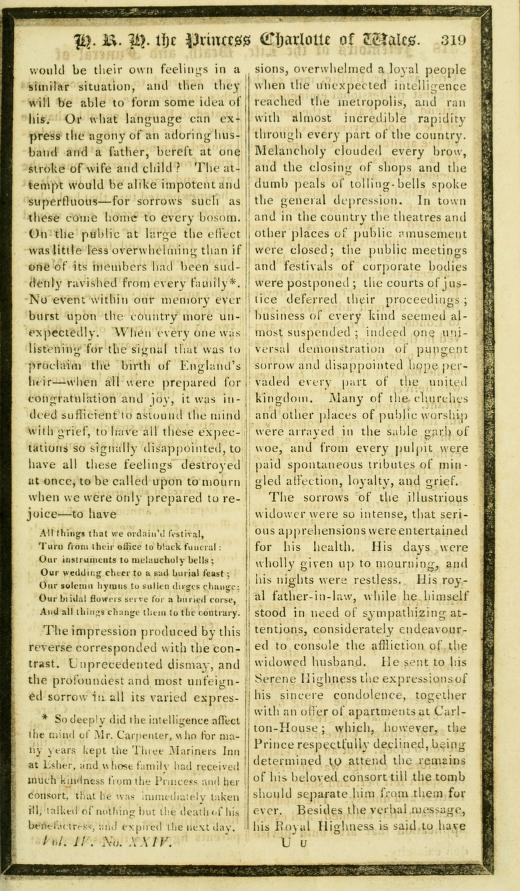 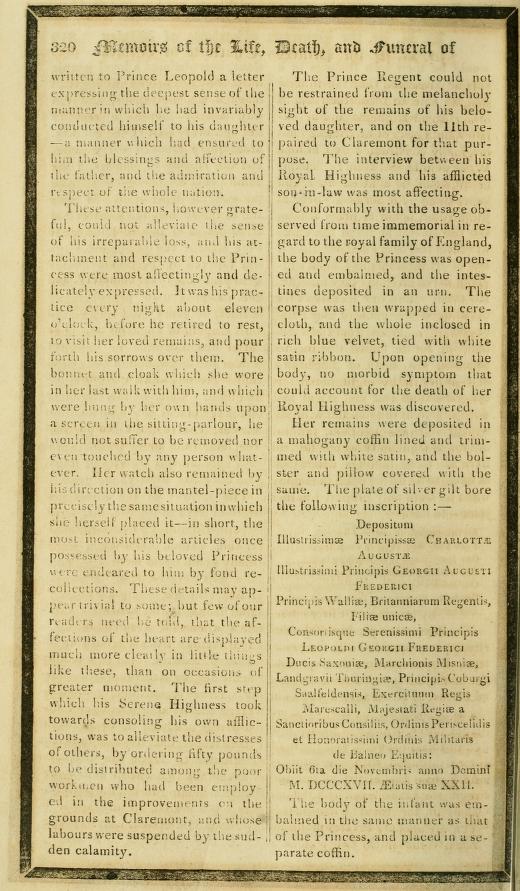 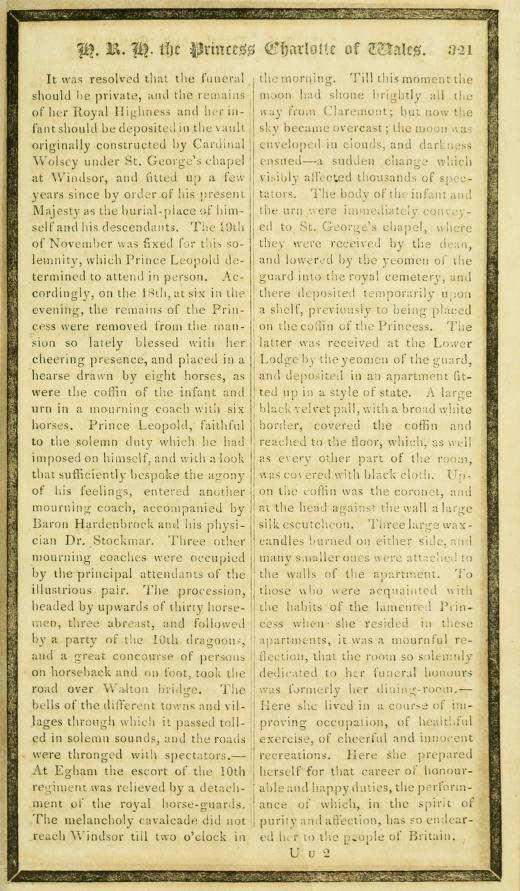 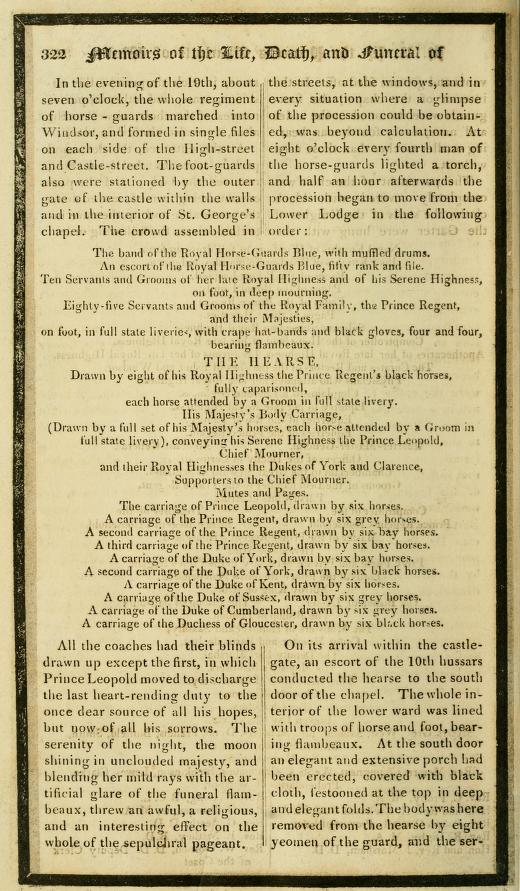 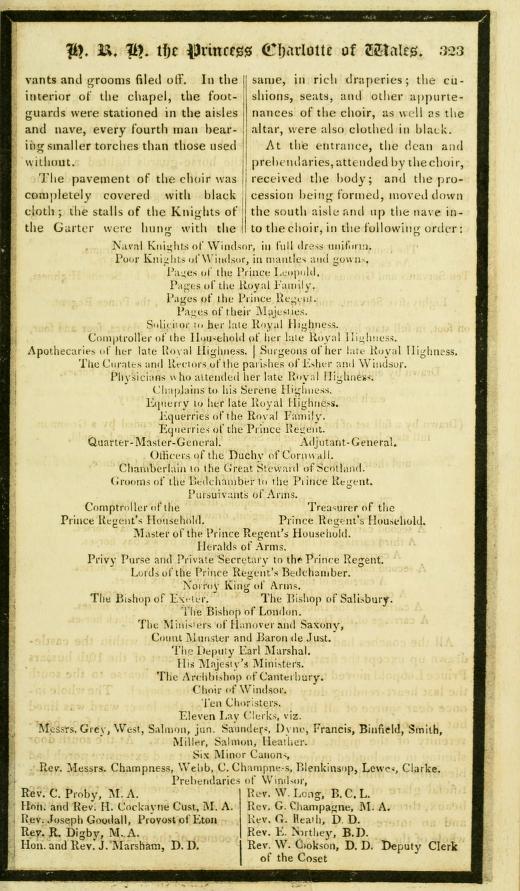 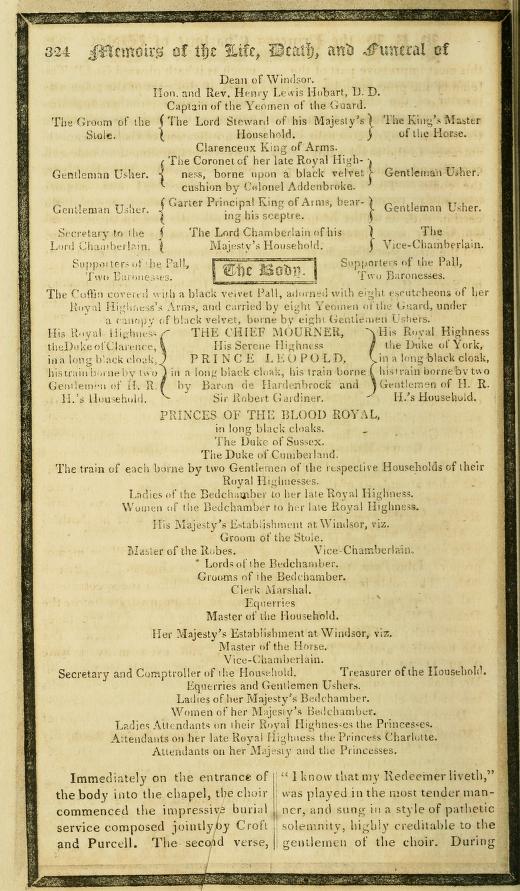 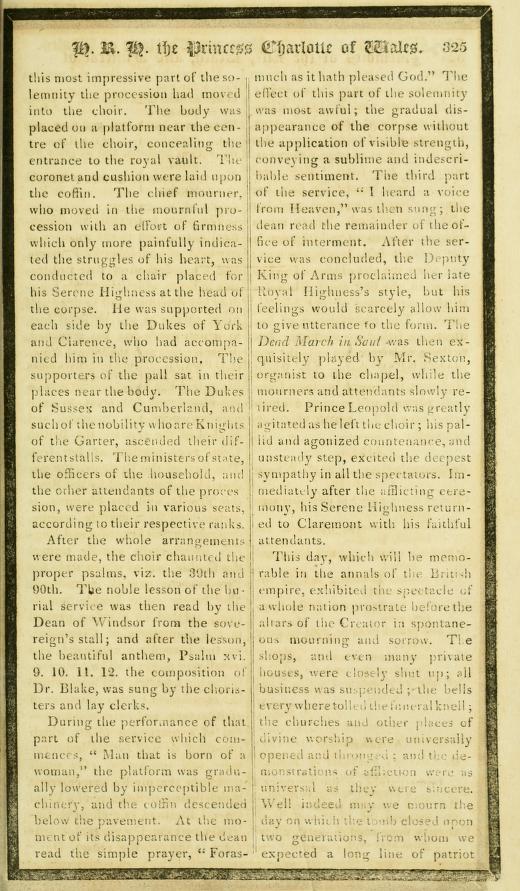 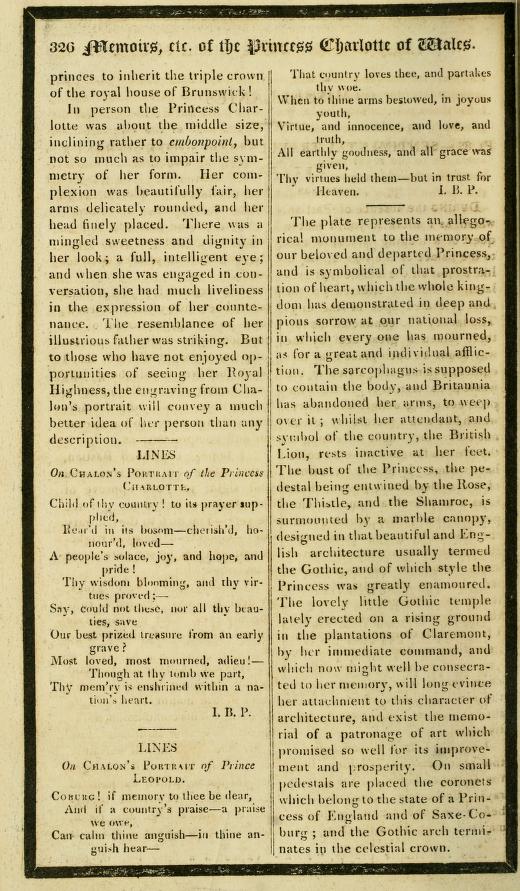 I hope you have enjoyed this glimpse into Regency England and that you join me again
for more Ackermann's Fashions and interesting tidbits of that era.
Till next time...

Thanks for visiting me here at EKDuncan.blogspot.com
If you have enjoyed seeing these images from Ackermann's Repository
and would like the opportunity to see and read an original for yourself
they are are available on line at www.archive.org
Click HERE then choose the volume you are interested in.
You can then see and read them online or download
them to your computer for future reference.
Enjoy!
Posted by EKDuncan at 3:36 PM