Today as I continue my series on French "Pantin" Jumping-Jack
Paper Dolls I have two more fun figures to add to the collection.

This is my "cleaned" up version of the original vintage paper doll
that can be seen on my previous post - HERE with her other playmates.
She was part of a sheet of 6 "Pantin" paper dolls.

And Here is what she looked like prior to restoration.

The inexpensive, mass-produced "Pantin" paper dolls that were printed on paper
similar to news-sheets were not what would be termed "quality goods".
Due to the low cost and quick printing process of these sheets, it was not uncommon for there to be runny ink or inaccurate ink overlaps between the image and the color layer.
Another issue was the lack of detailing on the faces; that caused them to appear "flat"

Occasionally deluxe versions of individual dolls or sets were created by a quality printer. The upscale "Pantins" were sold at book sellers/print shops and those dolls can be quite stunning.
My goal was to give these more "common" dolls a look similar to those "quality" versions
that would have been sold in upscale shops of their day and I think the makeovers went well.

Here are a few digital png images of created to show some of the poses you can create. 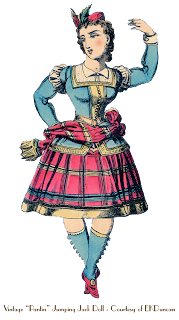 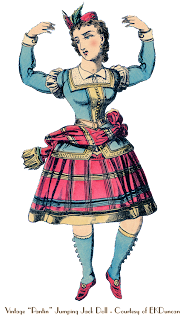 When these "Pantins" were originally created, what you saw is what you got; but with technology we can take it so many steps further.  I like to create digitally, so I've chosen to make digital dolls that I can flip and reverse direction at will like the middle doll shows. I like to have a few "extra" parts to play with so I can give her a great pose like the first doll shows - that required two duplicate arms. 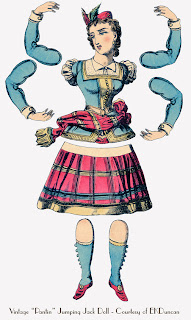 My version of the doll has her "spruced up" and looking pretty. The stray ink has been removed and the uncolored areas have been corrected.  Here face also now has some color to give her a bit more depth and I've placed in a another set of arms so there is more variety in how she can be posed.

Consider printing this doll sheet in it's original format and also in reverse to give you more options in assembling the doll, especially if you are creating multiples of an image.

Yesterday I posted two Gypsy Dancer "Pantins" so I thought I'd you might
like to see this Gypsy Pirate version of a Harlequin.

The Gypsy Pirate
I believe this "Pantin" was also produced by Epinal and he's a bit unusual in that he wears a harlequins costume, so I'm not sure if he really is a harlequin or not. Most of the harlequins I've seen in this paper doll line usually wear a mask and a few of the other characters that are not harlequins occasionally have a diamond pattern suite, so I think you can go either way with this fun character.

He is one of several vintage "Pantins" that were graciously posted on Flicker by "pilllpat"
and I suggest if you are a lover of vintage paper toy images you spend some time browsing her gallery.  You can find him HERE along with many others in her photostream album.

He has so much character but once again is just a bit "flat" due to the coloring process he was created with in the 1800's  He was a great candidate for a digital makeover. I also discovered a bit of a problem with the original figure as I assembled him.  He had super long skinny legs that were a bit comical so I decided to alter them so he was a more robust looking pirate.

Below you can see my updated gypsy pirate in several fun poses.
These guys are digital png format paper dolls but you can create them for real by
printing out the doll and assembling them with glue, brads or eyelets. 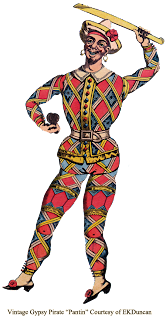 To assemble these puppets I suggest printing them on a heavy paper and then backing that with a heavy cardstock or light chip board before cutting the parts out.  Small brads are perfect for joining the doll parts; however eyelets would work well too.  You can even create a double sided puppet by printing the sheet in reverse so you see the pretty side no matter which way you flip it.
To make a true "Jumping Jack" doll string is also used to
connect the pieces so you can make the figure "dance".
In this case you want your brads or eyelets to be loosely fitted to the doll
so that when you pull the string the limbs will move easily.
My Pantin paper doll assembly instruction sheet on how to make them dance can be found HERE
An example of a large "Jumping-Jack" with string can be seen  - HERE
See more about Jumping-Jacks HERE and on string assembly HERE
I hope you like the two puppets I've posted today and that you are
building a little collection of these interesting jointed paper dolls.
I'd love to know if you create anything with them, so feel free to leave a note
on how you will be using them. I'm sure others would love to store the idea away too. - grins
I'll have some more to add in soon, so check back by in a day or so to see who they will be.
Till Next Time...