Another Vintage L&B Paper Doll to Play with by EKD

I'm back with another vintage L&B (Littauer & Boysen) paper doll from my collection
and like the others I've digitally altered, she too has several new looks too.

From the late 1800's thru the early 1900's L&B (Littaure and Boysen) continued to produce quality chromlithograph images and my favorite items from that collection are the articulated paper dolls.  These paper dolls were created in both ballerina and Prima Donna (bloomer girl) forms and many of them came in a variety of sizes.  Others were only available in one size.

These dolls were based on some of the top theatrical and opera beauties of the day - c1888 time period and the dolls were so popular they continued to be sold into the early 1900's.
I know the identity of some of the gems in my collection; however some of these beauties I'm not sure about so I can only assume whom they might represent.

If any one out there knows the true identity of this vintage paper doll
from the late 1880's - please feel free to let me know who she is.

I tried to win the image of this pink ballerina doll a few times before but she always went a bit higher than I was willing to go; then one day I lucked up on a auction for two dolls in fairly rough condition.  I rolled the dice, won them for $45.00 with shipping and was able to salvage the parts so I could create two nice digital versions of these hard to find L&B beauties.

I would never have bid this high on broken L&B paper dolls of the common variety but these two ladies are on the rare side and in my estimation worth the gamble; especially since I've not seen either of them come up for auction since I've purchased these.
I'm thrilled to have them in my collection and glad to share their images with you.

Both of these were an interesting add to my collection not just because these doll heads are more rare than some of the others but their sizes were unusual as well.  Until their purchase my collection consisted of the large 14 inch sized doll when assembled but both of these were smaller in size than I had previously owned.

The auction consisted of 2 broken dolls of each lady - so 4 broken dolls in total.
The dolls had also been "factory assembled" with grommets/eyelets, making it a tricky proposition to separate the parts.  It took time, patience and the right tools to get the job done but in the end my gamble paid off.  I was able to salvage most of the good parts from each doll to nearly complete one full doll of each.  Luckily I had a spare arm from other purchases that allowed me to finish off the smaller doll.

Eventually I will create art doll, wall pieces using the broken doll parts that are left over. I don't like gluing items over these old gems but in the case of broken parts like missing ballet slippers- those breaks can be easily hidden by adding a funky pair or boots on top. Add some clothing, trim and accessories and nearly any missing, broken or horribly flawed part can be disguised.
Nothing gets wasted this way and I get a chance to create an art doll using original
120+ year old parts without the guilt that I'm harming an antique.
(Hint - My intent is to turn my ladies with broken parts into Steampunk girls)
- but that's another post for 2013 - grins. 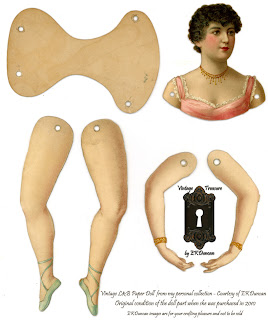 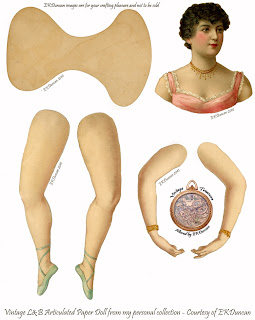 Eyelets leave big holes in these dolls and her parts were in rough shape but I knew
I would eventually clean her up in Photoshop so I could craft with her.
Even in this unvarnished state - she's a pretty doll;
however with the holes filled in she's much easier to craft with.

She's a cute doll as is but once more I decided to give her a new hairstyle for a more feminine look.

Victorian Ladies were known for their elaborate hairstyles so I gave her a bit more on top
and in the nape to mimic one of the styles I've seen in vintage photos of the day.
The new style softened here up a bit but if someone wanted to they could cut around the
extra hair so she would regain the shorter hairstyle similar to the original version.

Personally, I like her better with the new hairstyle so I hope you do too.

When I purchased her, she had blue ballet slippers but I thought she should match.
The first thing I did was correct this digitally so she coordinated.
Next I went to work on giving her new color choices with her wardrobe.
I've also thrown in an extra set of arms for added posing choices.

I hope you have enjoyed seeing another vintage paper doll from my collection,
what she originally looked like when purchased and now her new altered versions.

I think these dolls can be so much fun to dress up and play with artistically.
Even if all you do is add a pretty printed paper to cover her torso you have a lovely
"corset" doll or you can add trims, ribbon, lace, fabric, embellishments of all kinds
and create a truly one of a kind art piece.

The idea is to have fun and enjoy a bit of the past at the same time.

Here are a few ideas for dressing up an articulated paper dolls to get you started.

I'll be back soon with another vintage articulated paper doll for you to play with.