Dancing Marie #1 - The Fountain of Youth

I've taken several of my favorite "Opera Costumes"  from the previous post,
altered them and then created fun artwork to show them off.

Though this images are not of Queen Marie Antoinette herself;
they are in that same great French style, so I have dubbed this series of ladies
the "Dancing Maries" in her honor.

Here is the First Dancing Marie in the series.

If you take a close look at this Marie Antoinette looking lady you will probably notice that she looks quite a bit younger and thinner than the original image I started with. Factor in that she dances with a mirror and... I was inspired to create this fun "Fountain of Youth" scene for her.

While removing her background and "cleaning" her up a bit; I also played around with her appearance and discovered in the "new" version she seems to have lost about 10 or so years.
Now if we could just do that in real life with a few clicks of the mouse wouldn't that be grand.

Once I had her in a png format, I started playing around with various colorized versions for
her dress and in the end I had a whole chorus line of these Dancing Maries to play with.

So here they all are in various colors,  "ages" and some slightly "narrower" than others.

Now about the "Fountain of Youth" scene 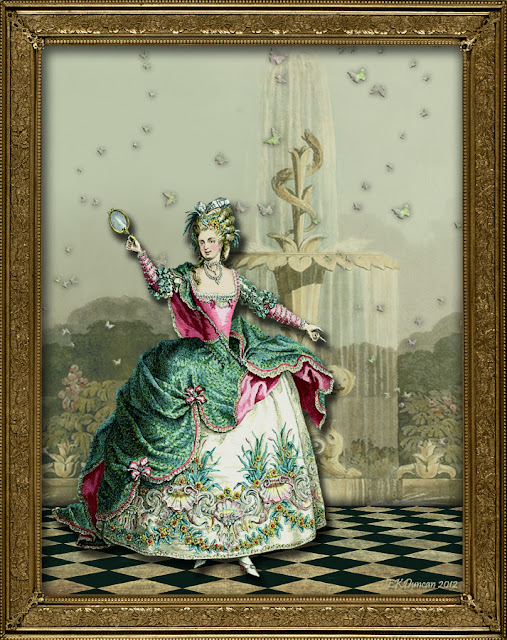 I used the Pink and Green "younger" version of Marie from above and coupled her with an Ackermann's Repository background; along with a few fun elements to pull it all together.
The pattern used to make the floor and the butterflies are from PaperWhimsy
(I have modified those images in both color and appearance to work with my scene.)

And to finish it all off this vintage frame.

Join me next time for Dancing Maire #2 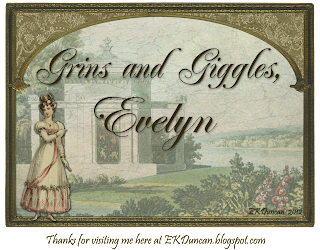